In 1947, Elisabeth Åsbrink, previous winner of the August Prize, intertwines global events with key moments from her personal history as the daughter of a Hungarian survivor. This was the year when Orwell commenced 1984, Israel was about to be born and Dior created the New Look. Writer and global analyst Jonathan Fenby’s forthcoming book Crucible turns the spotlight on 1948, from the beginnings of the Cold War and China’s civil war to the fall out of the creation of India and Pakistan.

Jonathan Fenby has written 18 books, including his acclaimed On the Brink: The Trouble with France and The General: Charles de Gaulle and the France He Saved, hailed by the New York Times as ‘a magnificent book… learned, incisive and gripping’ which ‘turns breadth and depth into enthrallment.’ An expert on both France and China, Fenby was Paris bureau chief for Reuters and The Economist and editor of bothThe Observer and the South China Morning Post. He is the recipient of both the Légion d’Honneur and the Ordre National du Mérite. 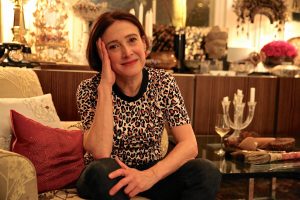 Marina Benjamin is a senior editor at Aeon Magazine. She is a former arts editor of the New Statesman magazine and deputy arts editor of the Evening Standard newspaper in London. Among her books, Living at the End of the World looked at modern end-time cults, Rocket Dreams offered an off-beat elegy to the Space Age, and Last Days in Babylon told the story of the Jews of Iraq. Following on from her widely acclaimed midlife memoir, The Middlepause (2016), her latest autobiographical work, Insomnia, was published in 2018.